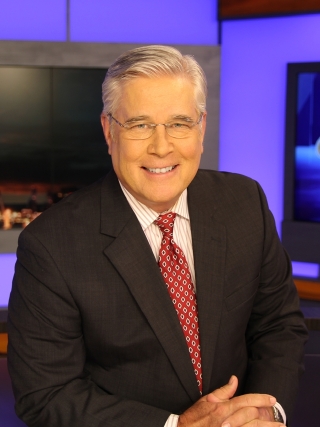 Greg Peterson is a 30-year veteran of the news business and anchors NBC15 News at 5, 6 and 10 p.m. His father was a broadcasting pioneer, working for more than three decades as a TV meteorologist, so Greg has been wandering the halls of television stations since he was old enough to walk.

"I have learned through my father, and my years in this industry, it is an honor to be invited into the living rooms of folks who watch the news. I work every day to earn that trust. It is something I take very seriously," Greg says.

Greg's love of the news business began in Chicago when he made his on-air debut on WGN Radio at the age of 13. Since then, he has enjoyed a variety of roles in the field of journalism anchoring and reporting in Knoxville, Tennessee; Charleston, South Carolina; Omaha, Nebraska; St. Louis, Missouri and Mobile, Alabama.

During his award winning career, Greg has reported from locations all across the country, from natural disasters to the White House. He has ridden a bull in the rodeo, a thoroughbred race horse from the gate and is one of the few people who has flown with both the Navy's Blue Angels, and the Air Force Thunderbirds. But Greg says one of his most satisfying series of reports revealed the dangers of prostate and colon cancer, and how easily these deadly forms of cancer can be uncovered by a simple blood test or colonoscopy. Greg credits a PSA test with detecting his own prostate cancer and leading to its cure. Greg shared his journey with Local 15 viewers, and continues to be an advocate of early detection.

"It is very rewarding when someone calls to say because of my reports, they had a colonoscopy or a PSA test, and early detection helped them beat these dreaded diseases," Greg says.

Greg has won several journalism awards throughout his career including four Emmys. Most recently, Greg was named Best News Anchor in Alabama by the Associated Press. He even has a Superbowl Trophy for calling play-by-play for the St. Louis Rams during their championship season.

Greg graduated from the University of South Carolina with a degree in broadcast journalism. He is married and has four children, ranging in age from college to 6th grade. When Greg is not reporting the news on NBC15, he can usually be found with his family fishing, hunting and exploring the wonderful variety of outdoor activities the Gulf Coast provides.