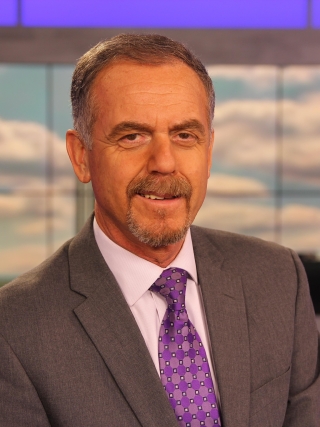 2017 marked Darwin's 37th year of either anchoring or reporting television news. Darwin now wakes up the Gulf Coast as co-anchor of NBC15 Today, teaming up with longtime friend and co-anchor Kelly Foster. Darwin will still offer up on-site reporting, as well as the occasional feature segment that has made him a fixture in the Mobile/Pensacola television community since 1987!

Darwin was born in Hazard, Kentucky in the Appalachian Mountains.

He worked in local radio in high school and community college before transferring to the University of Kentucky in Lexington. He then worked in radio in Lexington until 1980, switching to television news.

Darwin served as South Kentucky Bureau reporter and, later, police beat reporter for CBS affiliate WKYT-TV in Lexington. He became weekend anchor in his hometown of Hazard for the CBS affiliate WYMT-TV.

In 1987, tired of the snow and cold of winter, Darwin headed south to the Gulf, landing at the local CBS affiliate in Mobile. Late in 1999, Darwin accepted a position at WPMI NBC15 News as a feature reporter with his popular "Here's Darwin!" reports. In 2014 Darwin made the transition to the a.m. anchor desk, giving him another opportunity to communicate with his loyal viewers.

“When I first came to Mobile, my intention was to stay a couple of years and move on,” he says. “Well, that was 30 years ago! Mobile has shown me amazing support over the past three decades. And I’m proud to see how the city and region has progressed. We’re just now hitting our stride, and it’s a great time to be in Mobile!”

Darwin owns a century-old home in Midtown Mobile, in the city's Old Dauphin Way Historic District. He’s a huge support of Mobile’s vibrant downtown. And here at NBC15, Darwin’s passion for Carnival has earned him the nickname of Mobile's Mr. Mardi Gras!