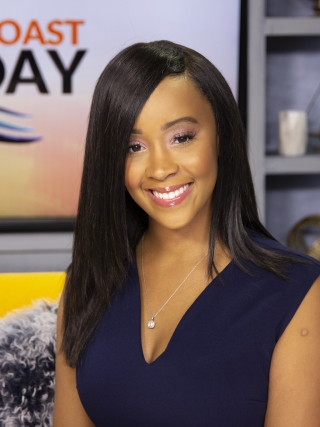 Amanda Booz joined the NBC 15 team in the spring of 2019 as the host of NBC15’s lifestyle show, "Gulf Coast Today."

Prior to joining NBC 15, Amanda worked in New York City for Viacom & BET Networks where she served as a Multi-skilled Host and Red Carpet Correspondent.

Amanda has always been fascinated with meeting new people and sharing their stories. She proudly represents Miramar, FL where she established her love for broadcast media. At the tender age of five, with a vibrant imagination, the Florida native would grab anything that resembled a microphone to "host" her very own show in the "studio" of her parents living room. That flame she sparked as a little girl grew into her college years when she launched her career working in both radio and news throughout Central Florida.

Amanda Booz is a proud University of Central Florida (U-C-F KNIGHT!) where she secured a Bachelor of Arts Degree in Communications with a minor in Mass Media Studies. During her time at UCF Amanda was heavily involved in the community where she spent a lot of time mentoring the youth through the Young Women's Leadership Program. She also created a campus radio show that grew to be one of the highest rated shows on the KnightCast platform. Her incredible passion for people, authentic personality, dedication to service and enthusiastic nature led her to also become a member of Alpha Kappa Alpha Sorority, Inc.. She is also a member of the National Association of Black Journalists.

When she's off-screen, some of Amanda's favorite hobbies include traveling all over the world, working out, blogging, and finding the hottest foodie spots in town.

Stay connected with her on social media.